Why use MultiSensory Instruction? 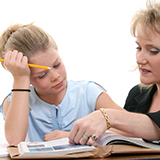 Students with dyslexia often exhibit weaknesses in underlying language skills involving speech sounds (phonological) and print (orthographic) processing and in building brain pathways that connect speech with print. The brain pathways used for reading and spelling must develop to connect many brain areas and must transmit information with sufficient speed and accuracy. Most students with dyslexia have weak phonemic awareness, meaning they are unaware of the role sounds play in words.

These students may also have difficulty rhyming words, blending sounds to make words, or segmenting words into sounds. Because of their trouble establishing associations between sounds and symbols, they also have trouble learning to recognize words automatically (“by sight”) or fast enough to allow comprehension. If they are not accurate with sounds or symbols, they will have trouble forming memories for common words, even the “little” words in students’ books. They need specialized instruction to master the alphabetic code and to form those memories.

When taught by a multisensory approach, students have the advantage of learning alphabetic patterns and words with engagement of all learning modalities. Dr. Samuel Terry Orton, one of the first to recognize the syndrome of dyslexia in students, suggested that teaching the “fundamentals of phonic association with letter forms, both visually presented and reproduced in writing until the correct associations were built up,” would benefit students of all ages.

What is an Evaluation?

When a child is struggling to read, someone will probably suggest that he or she be tested for dyslexia. What does it mean to be tested? You might think that of a test as something you take in an afternoon. Someone scores it and tells you how you did. Evaluation is a more accurate word to describe the process of determining if someone has dyslexia. The word evaluation encompasses identification, screening, testing, diagnosis, and all the other information gathering involved when the student, his or her family, and a team of professionals work together to determine why the student is having difficulty and what can be done to help.

An evaluation is the process of gathering information to identify the factors contributing to a student's difficulty with learning to read and spell. First, information is gathered from parents and teachers to understand development and the educational opportunities that have been provided. Then, tests are given to identify strengths and weaknesses that lead to a diagnosis and a tentative road map for intervention. Conclusions and recommendations are developed and reported. When a student is having difficulties with reading and spelling, an evaluation is important for three reasons.

1. Diagnosis An effective evaluation identifies the likely source of the problem. It rules out other common causes of reading difficulties and determines if the student profile of strengths and weaknesses fit the definition of dyslexia.

2. Intervention planning An effective evaluation develops a focused remedial program. Students who have a specific learning disability in reading (dyslexia) need a specialized approach to reading instruction to make progress. It is crucial that this specialized instruction begin at the student's current level of reading skill development, rather than at the student's grade level. An effective evaluation helps parents and teachers see which specific skills are weak and where reading and spelling instruction should begin.

3. Documentation An effective evaluation documents the history of a student's learning disability. One purpose of this documentation is to determine eligibility for special services, including special education. Documentation is also important for obtaining accommodations on college entrance exams (ACT, SAT), in college, or in the workplace.

A full psycho-educational evaluation is best done by a Licensed Clinical Psychologist who specializes in this type of testing.

Upon request, we can provide a short list of evaluators to you.  Our office can review the results of your testing and provide intervention for the identified deficits.

What should be Included?

Information from parents and teachers tells us a lot about a student's overall development and pattern of strengths and weaknesses. Because dyslexia is genetically linked, a family history of dyslexia indicates that a student is more likely to have dyslexia. A history of delayed speech or language also puts a child at-risk for reading difficulties. It is important to know the types and length of time of any interventions the student has received at school, home, or through tutoring, as well as the student's response to the intervention. School attendance problems should be ruled out. A history of poor attendance, alone, can explain an identified weakness in skill development.

Until recently, an intelligence test was considered to be a necessary part of the evaluation because the diagnosis of a learning disability was based on finding a significant difference between IQ and reading skill. Poor achievement despite average or better intelligence was considered a key indicator. Current regulations no longer require that such a discrepancy be present when making a diagnosis. This change in the regulations came about because many studies have shown that intelligence is not the best predictor of how easily a student will develop written language (reading and spelling) skills. Instead, oral language abilities (listening and speaking) are considered the best predictors of reading and spelling. A formal measure of intelligence is not always needed to document average intellectual abilities. For younger children, parent information about language development and teacher information about the child's ability to learn orally may indicate average intellectual abilities. For older students or adults, past achievement in school or work may indicate at least average intelligence.

Oral language, simply stated, refers to our ability to listen to and understand speech as well as to express our thoughts through speech. Oral language is made up of low-level skills, such as recognizing and making the sounds within our speech, and higher-level skills, such as getting meaning by listening to someone speak or creating sentences to express thoughts. Students with dyslexia typically have adequate higher-level language skills. Indicators of higher-level oral language skills include being able to understand an age-appropriate story and spoken directions, to carry on a conversation, and to understand and use words that are age appropriate. If a student has average higher-level oral language skills but much difficulty developing written language (reading and spelling) skills, the need for evaluation for dyslexia is recommended.

Word recognition is the ability to read single printed words. It is also called word reading or word identification. Tests of word recognition require that students read individual words printed in a list. The student is not able to use cues, such as the meaning of a sentence, to help them figure out the word. Tests of word recognition that score both accuracy and the time it takes for the student to read the words (fluency) are particularly useful. Students with dyslexia often become accurate but are still very slow when reading words. Both accuracy and the speed of word reading can affect understanding what is read.

Decoding is the ability to read unfamiliar words by using letter-sound knowledge, spelling patterns and chunking the word into smaller parts, such as syllables. Decoding is also called "word attack". Decoding tests should use nonsense words (words that look like real words but have no meaning, such as frut or crin) to force the student to rely on these decoding skills rather than on memory for a word already learned.

Tests of spelling measure the student's ability to spell individual words from memory using their knowledge of, for example, letter-sound pairings, patterns of letters that cluster together to spell one sound (igh in high; oa in boat), the way plurals may be spelled (s, es, ies) and so on. Spelling is the opposite of word attack but is even more difficult. It requires separating out the individual sounds in a spoken word, remembering the different ways each sound might be spelled, choosing one way, writing the letter(s) for that sound and doing the same, again, for the next sound in the word. Spelling stresses a child's short and long-term memory and is complicated by the ease or difficulty the child has in writing the letters, legibly and in the proper order. Spelling is usually the most severe weakness among students with dyslexia and the most difficult to remedy.

Phonology is one small part of overall language ability. It is a low-level language skill in that it does not involve meaning. Phonology is the "sound system" of our language. Our spoken language is made up of words, word parts (such as syllables), and individual sounds (phonemes). We must be able to think about, remember, and correctly sequence the sounds in words in order to learn to link letters to sounds for reading and spelling. Good readers do this automatically without conscious effort. However, students with dyslexia have difficulty with identifying, pronouncing, or recalling sounds. Tests of phonological processing focus on these skills.

Students with dyslexia often have a slow speed of processing information (visual or auditory). Tasks measure Naming Speed (also called Rapid Automatic Naming). Sets of objects, colors, letters, and numbers are often used. These items are presented in rows on a card, and the student is asked to name each as quickly as possible. Naming speed, particularly letter naming, is one of the best early predictors of reading difficulties. Therefore, it is often used as part of screening measures for young children. Slow naming speed results in problems with developing reading fluency. It also makes it difficult for students to do well on timed tests. Students with both the naming speed deficit and the phonological processing deficit are considered to have a "double deficit." Students with the double deficit have more severe difficulties than those with only one of the two.

The Science of Reading

from "The Science of Reading (A Response to the New York Times", by David Hurford, the IDA Examiner Vol 9, Issue 1 https://dyslexiaida.org/the-science-of-reading-a-response-to-the-new-york-timesIt is encouraging that the New York Times showed an interest in the very...

END_OF_DOCUMENT_TOKEN_TO_BE_REPLACED

from The International Dyslexia Association, "Effective Reading Instruction", www.dyslexiaida.org/effective-reading-instruction/ The most difficult problem for students with dyslexia is learning to read. Unfortunately, popularly employed reading approaches, such as...